The Bright Future of Applied Statistics

THIS IS A FREE EVENT

As part of the AMSI BioInfoSummer 2019 program, a FREE public lecture aimed at Year 10 students and above will be held on Thursday evening.

Register for the public lecture 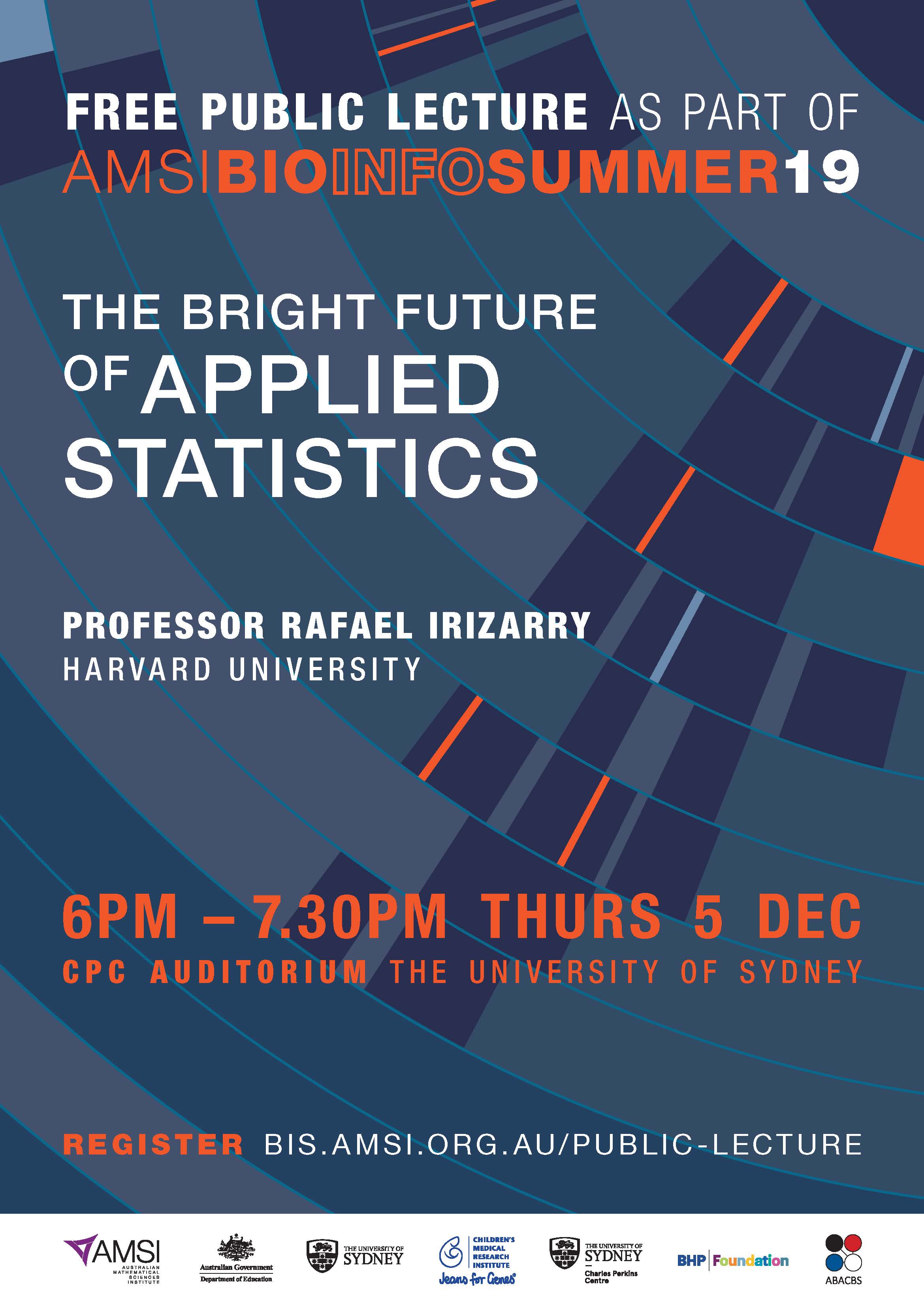 The Bright Future of Applied Statistics

Statistics has been at the center of many exciting accomplishments of the 21st century, with applied statistics being widely used across several industries and by policy makers. In academia, the number of statisticians becoming leaders in other fields like environmental sciences, human genetics, genomics, and social sciences continues to grow. The unprecedented advances in digital technology during the second half of the 20th century has produced a measurement revolution that is transforming the world. Many areas of science are now being driven by new measurement technologies and many insights are being made by discovery-driven, as opposed to hypothesis-driven, experiments. The current scientific era is defined by its dependence on data and the statistical methods and concepts developed during the 20th century provide an incomparable toolbox to help tackle current challenges. In this talk I will give several specific examples including some from own research in genomics and estimating the effects of Hurricane María in Puerto Rico.

Rafael Irizarry received his Bachelor’s in Mathematics in 1993 from the University of Puerto Rico and went on to receive a Ph.D. in Statistics in 1998 from the University of California, Berkeley. His thesis work was on Statistical Models for Music Sound Signals. He joined the faculty of the Department of Biostatistics in the Johns Hopkins Bloomberg School of Public Health in 1998 and was promoted to Professor in 2007. He is now Professor of Biostatistics and Computational Biology at the Dana-Farber Cancer Institute and a Professor of Biostatistics at Harvard School of Public Health. Since 1999, Rafael Irizarry’s work has focused on Genomics and Computational Biology problems. In particular, he has worked on the analysis and signal processing of microarray, next-generation sequencing, and genomic data. He is currently interested in leveraging his knowledge in translational work, e.g. developing diagnostic tools and discovering biomarkers.

Professor Irizarry also develops open source software implementing his statistical methodology. His software tools are widely used and he is one of the leaders and founders of the Bioconductor Project, an open source and open development software project for the analysis of genomic data. Bioconductor provides one of the most widely used software tools for the analysis of microarray data.

Please beware of booking services soliciting your personal information for travel and accommodation bookings for AMSI conference or events. AMSI does not engage with third party providers or ask for credit card details or foreign currency payments over email. Please report this behaviour to events@amsi.org.au.